Welcome to our third week! Feel free to answer however many questions you wish throughout this coming week. Next week, please read chapters 14 through 21.

Chapter Eight: Meg and Jo are going to a play with Laurie and Amy wants to go too. Jo harshly tells Amy she cannot go, leaving an angry Amy behind. While Jo is at the play, Amy seeks vengeance by burning Jo’s manuscript. Jo swears never to forgive her. The following day, Jo and Laurie go ice skating and Amy follows them. In anger, Jo does not tell Amy that the ice is thinner in the center of the lake. Amy falls in and Laurie saves her as Jo freezes. Later, horrified by her own temper, Jo talks with Marmee and learns that her mother once also struggled with controlling her anger.

Chapter Nine: Meg plans on visiting the wealthy Moffats for a few weeks. Meg’s family lend her their nicest attire and accessories for the occasion. While attending a party with Annie, Meg hears rumors that her mother must be intending for her or one of her sisters to marry Laurie for his money. Meg continues to worry about the rumors and her “drab” attire. She decides to let her friends dress her in fashionable attire and puts on a show. Meg encounters Laurie who disapproves of the way she is dressed and behaving. Meg hears another man at the party say the girls are making a fool of her. When she returns home, Meg tells Marmee about what happened. Marmee wants the girls to realize that true love is built on more than money and she only wishes for their happiness.

Chapter Ten: The girls are fans of Charles Dickens, and they establish a club they call the Pickwick Club, or P.C., after Dickens’s The Pickwick Papers (info on it here: https://www.worldbookonline.com/student-new/#/article/home/ar748747). The sisters produce a newsletter each week, with advertisements, poems, and stories. Jo suggests they invite Laurie to join the club. Meg and Amy vote against this because they do not want to be made fun of. Beth, votes for this and even suggests inviting Laurie’s Grandpa. This surprises Meg and Amy so much that they change their votes. Jo reveals Laurie had been hiding in the closet the whole time and Laurie pledges his faithfulness to the club. He then presents the girls with a makeshift mailbox for them to exchange notes and objects.

Chapter Eleven: It’s summertime and Aunt March and the King family have gone on vacations, allowing Meg and Jo some time to relax. Beth and Amy want time away from schoolwork and Marmee gives all the girls permission to take a break for a week. The girls set about their activities while Marmee and Hannah do their chores for them. On Saturday, Marmee and Hannah take the day off. The girls are left to fend for themselves and try to run the house. They fail but can laugh at some of the disasters. At the end of the day, Marmee teaches the girls a lesson about the importance of everyone contributing to the chores. Each of the sisters decide to take on a productive project for the summer.

Chapter Twelve: The chapter begins with the girls receiving a single glove, an enormous hat, and several letters in the mail. One letter causes quite a bit of excitement, Laurie invited all the sisters to a picnic to meet the Vaughns who are visiting from England. During the picnic, Fred Vaughn cheats at a game of cricket and Jo notices. Jo manages to control her temper and wins the game fairly for her team. Kate Vaughn, the oldest of the Vaughn siblings, is wealthy and fashionable. She is shocked to find out that Meg works as a governess. Mr. Brooke defends Meg and explains the importance of work in the American culture. Meanwhile, the rest of the sisters are connecting and chatting with other members of the Vaughn family.

Chapter Thirteen: Laurie sees the girls working on different projects and wants to join them. The girls call themselves the Busy Bee Society and are working on projects in keeping with their Pilgrim’s Progress goals. Laurie is told he can only join them if he keeps busy. Laurie decides to contribute by reading a book to the sisters. The conversation soon turns to dreams or “castles in the sky.” Each of the sisters and Laurie discuss their dreams and Laurie receives advice about his future.
Posted by Christopher at 10:30 PM 14 comments:

Thank you for joining us! Here you will find a summary of the chapters that were read this week. If you haven’t finished reading yet, do not worry. If you do not want to read the summary, you can click “comment” right below this post to access the discussion questions. We invite you to begin participating in the discussion questions underneath this post and reply to as many as you wish. They will be open for discussion from today until April 30th, so you still have time to read and reply. (For next week’s discussion, read chapters 8 through 13.)

Chapter One: The book opens with the girls lamenting about how hard Christmas will be for them this year, with their poverty and their father away, serving as a chaplain in the Civil War. The girls decide to use their hard-earned money to buy presents for their mother instead of presents for themselves. The girls then practice their Christmas play that Jo wrote. Mrs. March comes home and reads the girls a letter from Mr. March, in which he encourages the girls to work hard to be good. Mrs. March reminds the girls that life is like Pilgrim’s Progress and encourages them to continue onward to see how much they grow before their father returns.

Chapter Two: On Christmas morning, Mrs. March asks the girls if they would give their Christmas breakfast to a poorer family, the Hummels. The girls find joy in giving to the Hummels and in surprising their mother with gifts. That evening, they perform their play for their friends, and afterward they are surprised with ice cream and treats. Mr. Laurence sent the food as a gift because he heard of their generosity toward the Hummels.

Chapter Three: Meg and Jo are invited to Mrs. Gardiner’s New Year's Eve party. The girls share one good set of gloves because Jo ruined her pair, and Jo accidentally burns Meg’s hair off attempting to curl it for the party. When they get to the party, Meg makes sure Jo acts ladylike and does not dance, because then people would see the patch where Jo had once burned her dress. Attempting to hide, Jo runs into Theodore Laurence (Laurie). The two get along well and dance in the hall away from everyone else. Later, Meg sprains her ankle and Laurie offers them a carriage ride home.

Chapter Four: The girls struggle to cheerfully work again after the holidays. While all the girls grumble and Meg and Jo leave to go to their work, their mother is kind and waves goodbye as always. Her steady kindness surprises them. We learn that Mr. March lost his money while helping a friend, and Meg and Jo then wanted to work to help the family. When Meg and Jo come back home, each of the girls share a story about their day and their mother uses their stories to remind them to be grateful for their blessings.

Chapter Five: While Jo is outside shoveling snow, she decides to go over to the Laurence house to be kind to Laurie, because he “is suffering for society and fun,” once Mr. Laurence leaves. As they talk, Laurie reveals how lonely life is for him. Jo entertains Laurie with a story about Aunt March, and Laurie shows Jo his grandfather’s library and plays the piano. Jo says she isn’t much afraid of Mr. Laurence, and when he suddenly returns home, she appeals for Laurie to have more fun with people his age. After tea, Laurie plays piano and Mr. Laurence suddenly ends the visit. We learn that Laurie’s father married an Italian musician Mr. Laurence did not like and then both parents died when Laurie was young. Jo tells her family about the visit and does not catch that the “medicine” Laurie was thankful for was actually her.

Chapter Six: The Marches and Laurences’ friendship grows, but Beth is still afraid of Mr. Laurence. When Beth finds the courage to begin playing his piano, she does not realize how much her playing touches his heart. She decides to make him a pair of slippers to thank him for letting her play. He is so touched by her gift that he sends her a piano which belonged to his granddaughter who died years before. Beth is so touched that she conquers her fears and goes right to Mr. Laurence to thank him.

Chapter Seven: Amy needs money because the girls at school have been giving her pickled limes, and Meg gives her money to repay the girls because that is what the girls expect. The girls all act nicely to Amy when they learn she has limes to give out, but Amy remembers that Miss Snow was rude to her about her nose and refuses to give her one. Miss Snow tells the teacher that Amy has limes, which aren’t allowed, and the teacher makes Amy throw them out the window. Then he whips her hand and makes her stand in front of the school as punishment. When Amy tells her family, Marmee decides that Amy will not go back to the school, because she disapproves of the teacher’s punishment. Marmee still reproves Amy for her rule breaking and encourages her to be more modest like Laurie.
Posted by Christopher at 12:43 AM 20 comments:

Everyone should feel that their beliefs, opinions, and backgrounds are respected. We encourage you to share how you connect with the book and to include text from the book that supports your idea. It is helpful to know that Hoopla changes the number of pages in Little Women based on the type of electronic device you are on; therefore, if you are wanting to call attention to a portion of the text, it might be most helpful to simply mention what chapter it is in. We do not want to stray too far from the spirit of the book, and we ask that you do not include links to outside sources in your writings (though we encourage you to cite any sources that do enhance your reading). We may from time to time include background information that can be found directly through our library’s resources.
Thank you so much for joining us. Let’s begin this week with a few before-reading questions!
For next week, read chapters one through seven.

To borrow your copy of Little Women just follow these simple steps:
1. Visit www.myapl.org
2. Click on "Digital Media"
3. Click on Hoopla
4. Create a username and password
5. Search for Little Women by Louisa May Alcott

Hoopla also has an app that you can download for free from your app store. You can also listen to Little Women through the audiobook options on Hoopla.

Our librarians will post the questions and we can't wait to hear your thoughts!

Posted by Christopher at 6:05 PM 4 comments: 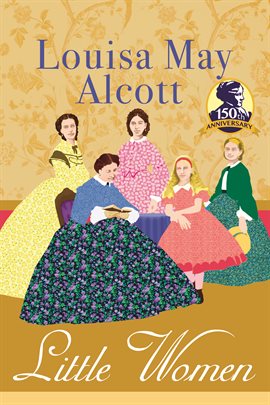